Flappy Bird: The Rise and Fall What is Flappy Bird? In short, it’s an addictively simple game. The idea is this, by tapping the screen you direct a bird across a Super Mario-esque world avoiding green pipes.  For each set of pipes you avoid you get a point. Sounds easy…

The game is one of the most viral apps we’ve seen, racking up over $50,000 of ad revenue a day and over 50,000,000 Android downloads alone. Flappy Bird has proven itself to be the goose that laid the golden egg. All of this in only a few nights coding from developer Dong Nguyen, effectively winging the app. The 29 year old Vietnamese developer caused a stir when he announced that he was pulling the plug on his viral sensation last week. The reasons stated were that the game was so addictive it had ‘become a problem’.

Poor Dong received a backlash on Twitter after his announcement, with a flurry of death threats and one silly goose sending him a satirical suicide threat. Here’s a Twitter list of some unhappy campers to help you lose faith in humanity. After this reaction, Dong was resigned to taking down his creation – proving too much of a birden for him to bare. His experience reminds me of Victor Frankenstein, who is horrified and ashamed of what he has made, only to reject it. 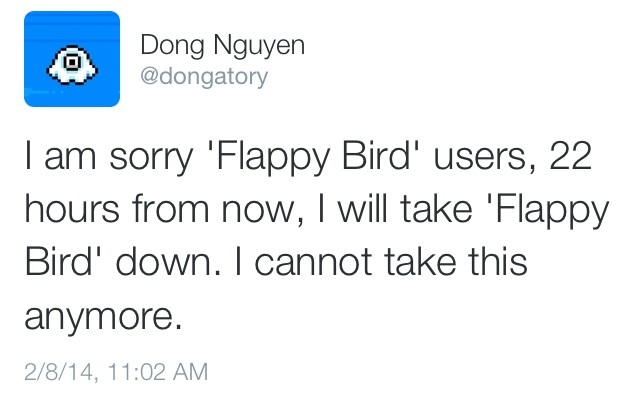 Despite the hassle that Flappy Bird has caused Dong, it’s something that we can learn a lot from. The game employs certain features that made it successful and it taught us a thing or two about the mobile gaming community.

In summary, the principles of being free, simple and social help Flappy Bird really take flight.